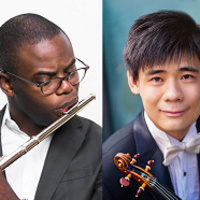 Demarre McGill is a leading soloist, recitalist, chamber and orchestral musician. Winner of an Avery Fisher Career Grant, he has appeared as soloist with the Philadelphia Orchestra, the Seattle, Pittsburgh, Dallas, San Diego and Baltimore symphony orchestras and, at age 15, the Chicago Symphony. In 2018 he performed and presented master classes in South Africa, Korea and Japan, was soloist with the New York Youth Symphony at Carnegie Hall, and on May 20, 2018 performed with the Cathedral Choral Society at the National Cathedral in Washington DC in a program entitled "Bernstein the Humanitarian.”

Winner of the Yehudi Menuhin International Violin Competition, Angelo Xiang Yu has received consistent critical acclaim and enthusiastic audience response for his solo recitals and orchestral and chamber music performances. Highlights of his 2018-19 season include debuts with the Rochester Philharmonic and the Sacramento, Spokane, Baton Rouge, and South Florida symphonies. He has also performed with orchestras in Pittsburgh, Toronto, Vancouver, Denver, and Houston, as well as with the Shanghai Symphony Orchestra, Auckland Philharmonia, New Zealand Symphony, Munich Chamber Orchestra, and Oslo Philharmonic Orchestra. An active recitalist and chamber musician, he has appeared in recital in Berlin, Paris, Beijing, Singapore, Shanghai, Auckland, Chicago, Pittsburgh, and in March 2018 he performed in Boston’s Jordan Hall under the auspices of the Chinese Cultural Foundation. During summer 2018, he made debuts at Music@Menlo, the Bridgehampton Chamber Music Festival, and the Sarasota Music Festival. He has also performed at Chicago’s Grant Park Music Festival, Chamber Music Northwest in Oregon, the Verbier Festival in Switzerland, and the Bergen Festival in Norway.

Dmitri Atapine has been described as a cellist with “brilliant technical chops” (Gramophone), whose playing is “highly impressive throughout” (The Strad). He has appeared on some of the world's foremost stages, including Alice Tully Hall at Lincoln Center, Zankel and Weill halls at Carnegie Hall, and the National Auditorium of Spain. An avid chamber musician, he frequently performs with the Chamber Music Society of Lincoln Center and is an alum of The Bowers Program (formerly CMS Two). His multiple festival appearances have included Music@Menlo, La Musica Sarasota, Pacific, Aldeburgh, Aix-en-Provence, Nevada, and Cactus Pear, with performances broadcast in Spain, Italy, the US, Canada, Mexico, and South Korea. His many awards include the first prize at the Carlos Prieto Cello Competition, as well as top honors at the Premio Vittorio Gui and Plowman chamber competitions.

Selected as an Artist of the Year by the Seoul Arts Center, Hyeyeon Park has been described as a pianist “with power, precision, and tremendous glee” (Gramophone). She is a prizewinner of numerous international competitions, including Oberlin, Ettlingen, Hugo Kauder, Maria Canals, Prix Amadèo, and Corpus Christi, and her performances have been broadcast on KBS and EBS television (Korea) and RAI3 (Italy), WQXR (New York), WFMT (Chicago), WBJC (Baltimore), and WETA (Washington, D.C.) radio. She is Artistic Director of Apex Concerts (Nevada) and a professor of piano at the University of Nevada, Reno. Her first solo CD, Klavier 1853, has been released on the Blue Griffin label.

School of the Arts, College of Liberal Arts, Music

$35 General Admission (Students tickets are $5 available at the Nightingale Concert Hall Box Office an hour before the performance.)