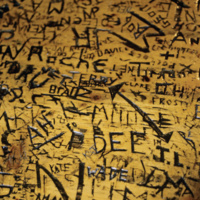 "Scale, Context, and Community"
Artist Daniel Faust and curator Lawrence Rinder will reflect on ways that scale, context, and community have influenced their respective practices. Faust, whose work often involves encyclopedic photographic arrays of subjects spanning the globe, will discuss a project focused on Alaska and another work-in-progress which will be his largest ever undertaking, including 15,000 works from 1981 to 2017. Rinder will contrast two exhibitions, Architecture of Life, which marked the re-opening of BAMPFA and included hundreds of works from many cultures and time periods and an upcoming exhibition that will take place in a tiny storefront gallery in the small ranching community of Cedarville, California (pop. 500).

For more information about his artowrks, visit:

Lawrence Rinder is Director Emeritus of the UC Berkeley Art Museum and Pacific Film Archive. He came to the University of California from the California College of the Arts where he was Dean of the College and Dean of Graduate Studies. Previously, he was the Anne and Joel Ehrenkranz Curator of Contemporary Art at the Whitney Museum of American Art where he organized exhibitions including “The "2002 Biennial." Prior to the Whitney, Rinder was founding director of the CCA Wattis Institute for Contemporary Arts, in San Francisco, and served as Assistant Director and Curator for Twentieth-Century Art at the Berkeley Art Museum and Pacific Film Archive. Rinder received a B.A. in art from Reed College and an M.A. in art history from Hunter College. He has held teaching positions at UC Berkeley, Columbia University, and Deep Springs College. His play, “The Wishing Well,” co-authored with Kevin Killian, premiered in 2006 and he is the author (with Colter Jacobsen) of the photo-text novella, Tuleyome (Publication Studio, 2011).

This event has been made possible with the support of the Art Department Nieder Endowment, the School of the Arts Artist Lecture Funding, and the College of Liberal Arts Hilliard Endowment. Thank you.