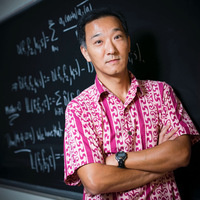 Discover Science Lecture: Why does Ramanujan, “The Man Who Knew Infinity”, matter?

Join the College of Science in welcoming Ken Ono, renowned mathematician and the Co-producer and consultant on the movie "The Man Who Knew Infinity" about mathematician Srinivasa Ramanujan. Registration information can be found at unr.edu/dsls.

Enjoy a public screening of the film before the event at the Joe Crowley Student Union Theater, March 10 at 4 p.m.

Ramanujan was a self-trained two-time college dropout from lush south India who left behind 3 notebooks filled with mathematical equations when he died in 1920. Mathematicians have been trying to figure out these formulas ever since, and the pursuit has led to solutions of ancient mathematical mysteries, breakthroughs in modern physics, and ideas that help power the internet. The mysterious “clerk of Madras” has been in the air a lot recently. News stories about black hole physics and discoveries in mathematics often center on his work.

To mathematicians and scientists, Ramanujan symbolizes pure inspiration, the sort of creative flight more often associated with musicians or artists. To contemporary India, he is a national hero, a household name. Furthermore, the story of Ramanujan provides a modern archetype, the rise from humble conditions to the world’s center stage that modern-day India itself exemplifies. But what makes Ramanujan’s story worthy of a mass audience?

Ono, who was an Associate Producer of the film “The Man Who Knew Infinity” (starring Dev Patel and Jeremy Irons) about Ramanujan, will offer many answers to this question. He will also share several clips from the film in the lecture, and will also tell stories about the production and promotion of the film.

College of Science, Mathematics and Statistics

The Davidson Mathematics and Science Center is located at the South end of campus near the 9th Street and Evans entrance.