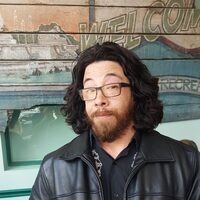 Saladin Ahmed was born in Detroit and raised in a working-class, Arab American enclave in Dearborn, Michigan. His novel Throne of the Crescent Moon was nominated for the Hugo Award for Best Novel and won the Locus Award for Best First Novel. He has also been a finalist for the John W. Campbell Award, the Nebula Award for Best Novel and the Nebula Award for Best Short Story. Ahmed's fiction has been published in anthologies and magazines including Strange Horizons, Orson Scott Card's InterGalactic Medicine Show, Clockwork Phoenix 2 and Beneath Ceaseless Skies. He is also the author of the Black Bolt series from Marvel Comics. He lives near Detroit with his wife and twin children.