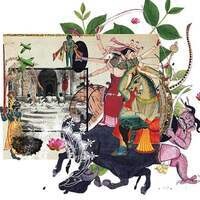 About seventy years ago, towards the end of World War II, a U.S. soldier stationed in rural West Bengal grabbed his Speed Graphic 4x5” press camera, hopped into a jeep and went off into the countryside to photograph. Who was he? Why did he leave his airbase to do that? We have no idea. What we do know is that he created remarkable images. And how did a shoebox full of 127 of his beautiful negatives and prints made in India in 1945 end up at an estate sale in Chicago many years later? Curators Alan Teller and Jerri Zbiral made that serendipitous find and have been “following the box” ever since.

In 2004, Alan taught a class on Photography and Anthropology at Lake Forest College that resulted in the first exhibit of these photographs. In 2011, guided by anthropologists at the University of Chicago, Alan and Jerri made a preliminary research trip to India to begin to unravel the mystery. In 2013, they were awarded a Fulbright-Nehru grant to continue the work. They spent five months in India and deter­mined that the photographs were made by a U.S. soldier stationed at the Salua airfield, a once secret American base near Kharagpur, India. The photographer was associated with the 10th Photographic Technical Unit of the XX Bomber Command, which operated in the China-Burma-India Theater during World War II. The unit worked from 1942-1945 preparing for a possible invasion of Japan. With the end of the war in Europe and the decision to drop the atomic bomb, the unit was dissolved. May 1945 was a transitional period, while the men were waiting to be reassigned. It seems likely that this collection of images was made then as a personal project by one of the unit’s reconnaissance photographers.

These images provide a window into an India that has changed dramatically in some areas while re­maining the same in others. Following the Box is visual story telling across space, time and culture, a mystery tale of old photographs and new artistic interpretations.