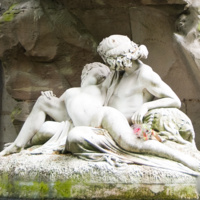 Acis and Galatea was composed by Handel in 1718. He created many versions of the work, transforming it from an English masque, to a bilingual Italian and English serenata, and finally to the English language two-act opera that is most commonly performed today. The opera, with a libretto by John Gay, is based on Ovid's Metamorphoses (Book XIII). Acis and Galatea was the opera of Handel's most performed during his lifetime. It tells of the love between Acis, an Arcadian shepherd, and Galatea, a nymph, and the mortal jealousy of Polyphemus, a giant.