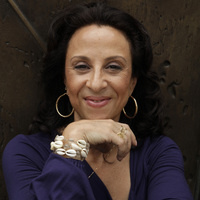 Maria Hinojosa is an award-winning news anchor and reporter who covers America’s untold stories and highlights today’s critical issues. In 2010, Hinojosa created the Futuro Media Group, an independent nonprofit organization producing multimedia journalism that gives a critical voice to the diversity of the American experience. As the anchor and Executive Producer of the Peabody Award winning show Latino USA which is distributed by NPR, and anchor and Executive Producer of the PBS show America By The Numbers with Maria Hinojosa, she has informed millions about the changing cultural and political landscape. In 2016, Hinojosa became the host of In The Thick, Futuro Media’s new political podcast, and Humanizing America, the company’s digital video series that deconstructs stereotypes.

Topics:
• Frontlines:  Latinos & Immigration from a Woman's Perspective
• Latinos in the Media
• A Critical Look at the Media in a Post 9/11 Reality
• A Leading Latina on “Owning Your Voice”