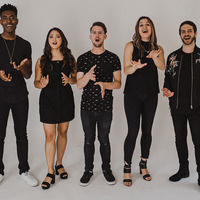 The University of Nevada, Reno’s Performing Art Series presents Backtrack, an a cappella YouTube sensation with more than 10 million views of their video mash-ups of hits by Sia, The Chainsmokers, Ariana Grande, Pitbull, The Beatles, Stevie Wonder, Michael Jackson, and even Beethoven. The effervescent quintet has performed at Carnegie Hall, Apollo Theater on Broadway in “Kinky Boots,” and throughout the U.S., infusing every performance with its infectious love of singing. The group is a rising force in music competitions after winning New York’s Got Talent! Season 6 in April 2019 and Steve Harvey’s 2017 “Sing Off” on his nationally televised Steve show.

This group was great. They demonstrated their talents exuberantly which was contagious and the audience participation was elevated.