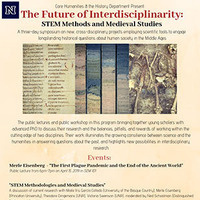 “The Future of Interdisciplinarity”: STEM Methods and Medieval StudiesSymposium

The last decade has seen an enormous rise in the number of research projects employing scientific tools toengage long-standing historical questions. From isotope analysis to biodistance markers, new research has demonstrated the efficacy of interdisciplinary effortsto address long-standing issues in medieval studies. This symposium will feature public lectures (April 15 and 17) and a public workshop and discussion (April 16). Emerging scholars and advanced PhD students from the UNR community will discuss the balances, pitfalls, and rewards of working within the cutting edge of two disciplines. Guest speakers include: Merle Eisenberg (Princeton University) and Maite Iris García Collado (University of the Basque Country). These three events, organized by CH Distinguished Professor of the Humanities Ned Schoolman, will illuminate the growing consilience between science and the humanities in answering questions about the past, and highlight new directions in interdisciplinary research.