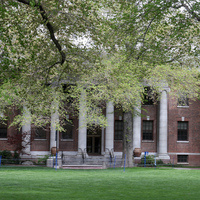 The Mackay Science Building was dedicated in 1930 to serve the Departments of Physics and Chemistry. The $425,000 building was a gift to the university from Clarence H. Mackay, who, along with his mother, had earlier donated the funding for the Mackay Mines Building. This Georgian-style structure, complete with Ionic pilasters, was designed by Reno architect Frederick De Longchamps. When it opened, Mackay Science was considered one of the most modern science teaching facilities in the West. The building today houses the Department of Geography, which has earned a reputation for its excellence in teaching. Over the years, four members of the geography faculty have earned the F. Donald Tibbitts Award, awarded each year to the University’s finest teacher.

Dr. Abbott is a national expert on community service learning. She is author of the forthcoming book "Community Service Learning in Foreign Language Instruction" (Prentice Hall) and of the only Spanish community service learning textbook published to date, "Comunideades" (Prentice Hall, 2010). She maintains a blog at http://spanishandillinois.blogspot.com